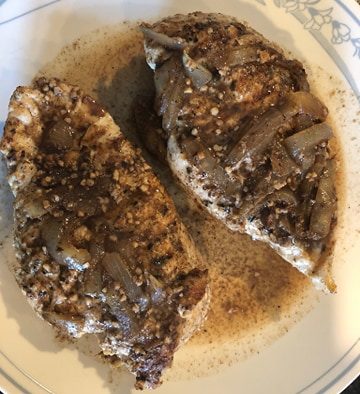 This delicious chicken dinner is phase 1 compliant but feels like a cheat. It is so delicious your tastebuds won’t believe its “diet”! Cook some of this up for family dinners or gatherings and they will be begging for more.

Heat oven to 425˚ heat oil in large oven-safe skillet on medium. Season chicken with ½ tsp each salt and pepper and cook until golden brown, and crisp, about 10 minutes. Flip and cook 1 minute more; transfer to plate and cover to keep warm.
Add onion to skillet and cook, covered, stirring occasionally, until tender, about 8 minutes. Uncover and stir in garlic, cumin, cinnamon, coriander, ginger and ½ tsp each salt and pepper and cook, stirring occasionally, until onion is golden brown, 5 to 6 minutes more.
Stir in broth, scraping up any browned bits. Return chicken (along with any juices) to skillet; stir in preserved lemon. Transfer to oven and roast until chicken is cooked through (165˚F), 8 to 10 minutes.
Sprinkle with parsley and serve.